Ernest Yeo: Structure behind the chaos

From a life of monotonous work shifts amongst machines to erratic hours with shimmery gemstones, Ernest Yeo took a leap of faith from being a broadcast engineer to being a jewellery designer. One might wonder how he could change to such a different industry, but jewellery was not new to him: at a young age he was always captivated with anything that sparkled and glittered.

Entrenched in a job of repetitive tasks for the past 8 years, Ernest pursued a part-time degree in Mass Communications to complement his background in Film, Sound & Video. He was hoping to seek job satisfaction as he began feeling restless. One day, he happened to catch a fashion television program featuring contemporary jewellery, and it began to fuel ideas in his mind on the endless possibilities that he could do with jewellery, the thought alone excited him!

That eventually led him to a cross road, which made him ask the burning question, “What am I doing in this (current) job?” The question was the catalyst, and he took his first steps by researching on Jewellery Design courses, upon comparison, he felt JDMIS could best provide him the necessary tools for his journey.

Besides taking up jewellery design courses from hand drawing techniques to computer aided designs, he went on to equip himself with traditional metal smithing and powder metallurgy skills at JDMIS. Upon asking him which skills are important, “Preferably all the skills, so as to understand the production process, what to emphasise and cut back on to manage costs better.”

Having no prior knowledge in the jewellery industry, Ernest had no idea what to expect, “I was impressed with all the work done for fine jewellery and how it is done. It is crazy!” Upon learning the various technicalities and skills in jewellery design, Ernest now has greater conviction and interest in being a jewellery designer, “I feel jewellery designing is no different from an artist painting, it is still a form art, I get to express myself through jewellery, that’s the best thing!”

One always wonders where do designers get their ideas from? With Ernest, his inspiration comes to him from everywhere. “I like to look at certain things and I like to decode the patterns. I can look at nature, it looks very chaotic, but I am always (able to) make sense of it, finding a structure behind the chaos, not just nature, but in architecture, animals, everything.”

Spoken like a true artist, he also adds, “My jewellery designs also reflect who I am, I am someone that likes balance. Sometimes this is impossible though, there is always a struggle.”

Most individuals would have been content with making a career change and being self-sufficient, but not Ernest. He dreams of Hollywood, Big! “I don't consider myself a successful jewellery designer yet, I will feel successful if I have dressed someone from the Emmy Awards!”

Even though Ernest has Hollywood in his sights, he continues to stay true to himself: on top of the aim to be a celebrity jewellery designer, Ernest aims to connect with his clients and understand them better by being approachable and friendly. He believes that it enables him to be able to find that balance in designing a piece that will appeal to the masses but yet retain originality.

Values as a jewellery designer

Without any values, one will falter and stray from the desired path. The struggle that Ernest faces is the balancing act between designing a practical piece for the masses and creating individualistic pieces. “It’s difficult to design what you want versus what a consumer wants. Once again, it is finding a balance between the two.”

His guiding light is about being true to himself, embracing the designer within. “I’m still figuring out things. There is a wide variety of consumers, it is important to anchor yourself, be true to yourself in your design, so when your consumers really like your original designs, you know there is a connection when they come to you.”

Like every designer, Ernest faces the dreaded creative block at times. “Encountering a creative block is common as a designer. There is a saying that when you fly a kite, you pull the string too hard, the line might snap.” As the saying goes, less is more. When hitting the block, Ernest will just stop whatever he is doing and just move away from jewellery. One of the main causes of the block is that one is thinking too much. In addition, having a strict timeline makes matters worse, “In designing and ideas, theres no timeline. I usually work on a few projects at a time, so sometimes we get impulsive in buying gems because we get so many ideas.”

No journey is without its obstacles, some might just stop one from continuing. Ernest is no different. He faced different obstacles such as financial stability and exterior pressure from his parents and friends. “I have a traditional mom who felt that I should work with the government, get a stable income. I know there are all these out there, it’s a choice that I made.”

Having started his own brand this year, Ernest is giving his all and the next five years to establish his brand, after which he will decide where the road leads. He is knocking down the obstacles one at a time by keeping close to his heart what is most important, “I have to pull what inspires me the most in life, and I feel jewellery designing, gemstones, are what I really like, beyond that there is nothing else.”

Discover more about Ernest’s designs and achievements here at www.ernestyeodesigns.com

In celebration of his friendship and bond with his furry friends, Why We Love Dogs was born.  Dog owners can customize your doggie tags here at www.whywelovedogs.com and part of the proceeds goes to Action For Singapore Dogs. 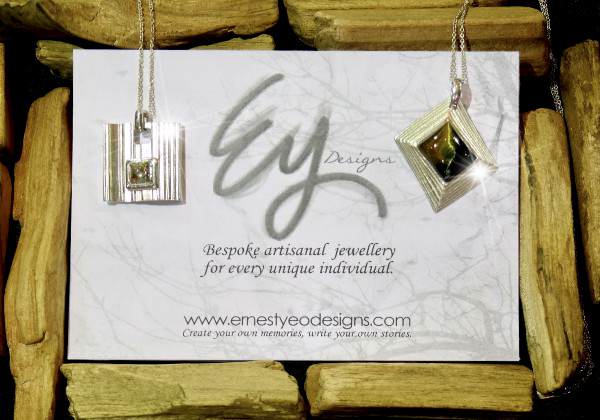